Elon Musk Public Lecture: "Cosmic Inflation: My journey to the edge of science" 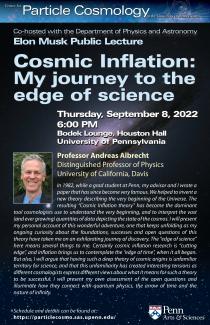 Professor Andreas Albrecht (University of California, Davis): In 1982, while a grad student at Penn, my advisor and I wrote a paper that has since become very famous. We helped to invent a new theory describing the very beginning of the Universe. The resulting “Cosmic Inflation theory” has become the dominant tool cosmologists use to understand the very beginning, and to interpret the vast (and ever growing) quantities of data depicting the state of the cosmos. I will present my personal account of this wonderful adventure, one that keeps unfolding as my ongoing curiosity about the foundations, successes and open questions of this theory have taken me on an exhilarating journey of discovery. The “edge of science” here means several things to me. Certainly cosmic inflation research is “cutting edge”, and inflation brings us to contemplate the “edge of time”, when it all began. But also, I will argue that having such a deep theory of cosmic origins is unfamiliar territory for science, and that this unfamiliarity has created interesting tensions as different cosmologists express different views about what it means for such a theory to be successful. I will present my own assessment of the open questions and illuminate how they connect with quantum physics, the arrow of time and the nature of infinity.